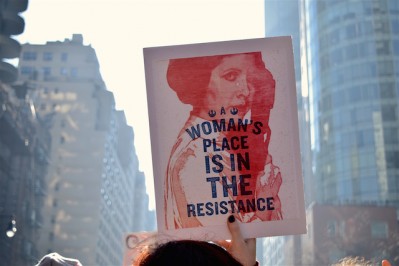 At the 2018 Cannes Film Festival, 82 women marched down the red carpet and up the iconic Cannes stairs in solidarity. These actresses, filmmakers and Hollywood executives represented the exact number of films by female directors that had been in competition during the festival’s 71-year history. A minuscule number compared to the 1,645 films directed by men. Following the bold and eye-opening demonstration, 5050×2020 was launched.

5050×2020 is a global call and a pledge for organizations in the film industry to become more transparent and to achieve gender parity in the year 2020. The pledge, first signed at Cannes, has now been adopted by 112 festivals around the world, including the Toronto International Film Festival. Numerous other organizations in and around the industry have been inspired to add their names to the cause. The movement joined by #TimesUp is demanding equality in the industry and since then gender parity has been a key subject at every major film event.

Here we are, almost two whole years since the movement began, just over two months into 2020 and on the cusp of another International Women’s Day. How did we do?

While we’re still about two months out from the announcement of the 2020 Cannes film lineup, we can look at the numbers from the previous year to plot and predict our progress. In 2019, Cannes selected four female-directed films for competition out of a total of 19, the highest ratio that the festival has seen since 2011. In total, 13 female directors were represented within the full 47-film selection. Two of the women co-directed one of the films. This year’s number to beat is 25%.

In terms of on-screen representation, the Los Angeles Times reported earlier this year that leading, major and speaking roles for women had increased in the past year based on a study of the top 100 grossing films of 2019. However, that increase did not see an equal rise in intersectional roles. On-screen depictions of women of colour actually decreased in comparison to the year before.

The industry has been particularly vocal about the state of equality during this year’s awards season. Much of the buzz and on-stage banter at the galas were centred around how few women directors were nominated and who had been offensively snubbed. There were some improvements over previous years, however, as the Oscars reached a record high number of female nominations. Women made up 31% of all nominees this year including both on-screen and off-screen categories. The percentage has been rising each year since 2016, which saw women make up 23% of nominations.

At home in Canada we have been making strides at a similar pace. By their 2018 festival, TIFF had already achieved gender parity within their programming team, which was comprised of 13 women and 9 men. TIFF being slightly ahead of the game, had also launched the Share Her Journey initiative in 2017, which prioritizes gender parity by focusing on mentorship, skills development, media literacy and activity for emerging creators. As part of additional efforts made after the pledge was signed, TIFF implemented nearly 200 more writers and critics to support underrepresented voices at their major film events. The following festival in 2019 saw female directors representing 36% of the 333 films that made up its full lineup. It was a minor increase from the previous year. It may not be the most impressive number but a review of the film submission data for the year gives it more context. The National Post reported that roughly 32% of the submissions received last year came from female directors. The ratio of submitted films to programmed films is very closely aligned. The gender parity issue can’t be fixed by simply programming more films by women. In order to do that, we need more women to make films, and in order for that to happen, the industry must first foster and create more opportunities for female talent – which is the main goal of the Share Her Journey and other industry initiatives.

Telefilm, which invests nearly $100 million into Canadian film each year, announced last month that it is on track to meet parity this year. In 2019, 61% of the films that Telefilms finances had female producers, a 13% increase from 2018. In addition, 41% of the financed projects were written by women and 39% had female directors. Although there is still much work to be done to even the numbers, Telefilm’s team and Canadian industry leaders are optimistic.

Despite the glacial pace of these percentage increases, change is indeed happening. It’s unrealistic to expect drastic changes immediately. While we can’t overhaul an entire system at once, we can plant the seeds that will promote an organic shift. We may not be taking leaps and bounds at a time, but we’ve made actionable plans and trackable progress. Over the past two years it has been encouraging to see the mindset shift within the industry. We’ve witnessed many deserving women accept leadership roles, create critically-acclaimed work, mentor those to come after them, and demand that we do better as a whole. And we’ve still just hit the 30-40% mark in most major cases. The change is already palpable and there is much more to be done.

Hitting the 50/50 mark by 2020 may have been an ambitious goal, but it’s the kind of ambition we need to keep the momentum going. We may be well into 2020 but the race is not yet over. Let’s make the next 10 months count.