It’s PR, not ER, and other sage advice for budding publicists 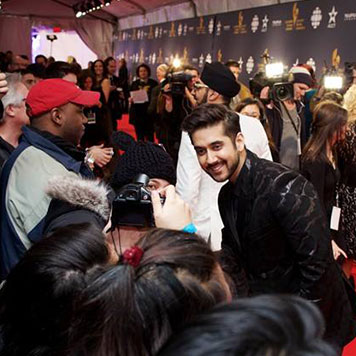 I’ve been working in entertainment PR for nearly a year now, and it’s been a whirlwind. After three internships (and now an awesome job!), I’ve already gained a lot of first-hand experience outside of the classroom. When I was a student at Humber, one of my teachers started the year off by reading letters of advice written to us from a few alumni. So here is my letter. These are the tips I would have given myself a year ago, useful for anyone considering a career as a publicist.

1. Embrace Murphy’s Law. Anything that can go wrong WILL go wrong. It doesn’t matter how carefully you prepare for a press day or scrutinize a schedule, something unexpected will always happen.

At my first TIFF this past September, I was tasked with scheduling the cars that take talent to and from their red carpet premieres. This was a huge responsibility for me, so I made sure that I went carefully over every detail beforehand. After the premiere of My Old Lady at the Winter Garden Theatre, I had three cars waiting to pick up Kevin Kline and the rest of our cast. However, there ended up being another premiere at the adjoining Elgin Theatre, and I unexpectedly had to convince Richard Gere’s driver to move his car to make room. With everything in place, I was caught off-guard yet again by the news that the person who was moderating the film’s Q&A had fainted on stage. I ended up having to move some of the cars to make room for an ambulance, just as Kevin Kline and co. were scheduled to exit the theatre. Fortunately, I was able to get the cars back in place just in time, but I learned that sometimes things don’t go as planned, and you just have to keep your cool and figure it out.

2. Know your PR jargon. I’m talking about boilerplates, photo pits, junkets and locking the carpet. Oh, and it’s good to know what a media scrum is, just in case you get thrown into one.

Before the Canadian Screen Awards press conference, I overheard that a media scrum was to take place that day, but since I was tasked with signing media into the event, I didn’t concern myself with asking what a media scrum actually was. I thought I’d learn just by witnessing it from a safe distance.

However, at the event, someone asked me to bring a stack of press kits up to the media scrum. As soon as my colleague Jen saw me, she pointed out a nominee standing on his own in a sea of actors and media, all scrambling for interviews. They were short on publicists, and she asked if I could pitch him to media. The actor waved to me from across the room and I immediately starting panicking. This brings me to my next tip for aspiring publicists…

3. Confidence (or at least the appearance of confidence) is key.

I motioned to the actor that I was on my way. While internally freaking out, I casually started reading about what TV show he was even in as I walked over. I made a quick stop over to where my colleague Dan was standing, held a paper up in front of my face so that I could privately let him know that I had no idea what a media scrum was or what I was supposed to do in one. Thankfully, he also kept his cool and discreetly replied that all I had to do was approach the media to ask if they wanted to interview my assigned actor, which wasn’t nearly as terrifying as I thought. I kept it together, introduced myself to the actor, and even managed to get him a few interviews.

4. Bring a snack, or several meals if needed.

All you need to do is go through one day at TIFF without packing a lunch to realize how foolish you’ve been. During TIFF, a typical day for me was waking up early to do clippings before heading to a full press day, then working a pre-party, a premiere, and an after-party. I hardly had a second to breathe let alone find something to eat. So do yourself and everyone around you a favour and pack some food. Nobody likes a “hangry” publicist.

5. Above all, always remember it’s PR not ER.

This is probably the best advice I’ve ever received, given to me before working my first big press conference at Shaw Media. Regardless of how scary an event can seem when first starting out in PR, it’s not as bad as you think. Mistakes can be fixed, and (hopefully) no one is in mortal danger.

A year ago, I never thought I’d be able to handle half of the situations I’ve been thrown into, but each time I’ve made it through without any major catastrophes. I’ve still got a lot of growing to do, but I’m much more confident than I was a year ago. I hope that this advice helps reassure you that you’ve got what it takes to make it as a publicist.