The Inside Out of Winnie Luk 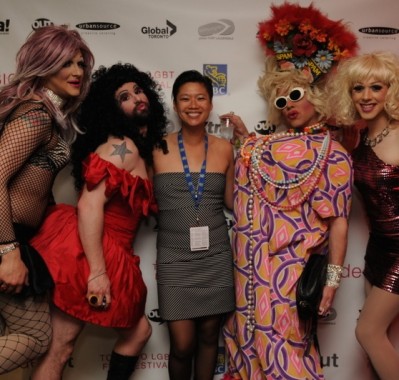 The Inside Out Toronto LGBT Film Festival just celebrated its 25th anniversary and wrapped another successful edition.  Having worked with this remarkable festival for the last three years, and witnessing the extremely high levels of passion and commitment from all who work there (including permanent staff, contractors and volunteers) – we thought it would be interesting to sit down with a festival veteran to see what what really drives her to succeed.

Winnie Luk, the Festival’s Director of Operations and Events, has been with the organization for 13 years helping it grow into not only one of the largest film festivals in Toronto, but also the largest LGBT film festival in Canada. Winnie can plan and run and event with her eyes closed and literally on one leg, since she fractured her foot a couple of days before opening night!

We sat down with the fierce and passionate Festival veteran to get an inside (and out) look at her role, the future of the festival and what she does when she is not planning one of the best cultural events in Toronto.

Do you make benchmarks every year for yourself?

As an organization obviously we have our strategic goals and planning but personally I always have ideas, whether for a party, an event, a whole new major initiative, a video project or a fundraiser. It’s not written in stone and keeps me on my toes.  Next year can be whatever we want it to be. The last two years has been especially crazy because of World Pride in Toronto and the 25th anniversary so we had a lot of room to do different things and be bigger and more creative.

What are the major changes you have seen since you started with Inside Out within the Festival and also the organization’s contributions to the community?

Even something as small as when I started we had one computer with internet and four full-time staff but now having full-time marketing and development coordinators make a huge difference.  We also received a major gift which totally changed the face of Inside Out and what we can do.

Within the community, we have been one of the top 2 or 3 events. No matter how we have fluctuated we have always secured that spot and we work well and closely with other organizations. It’s a very supportive community whether it’s the arts or the queer community.

The creation of the Ottawa LGBT Film Festival about eight years ago was a major milestone as well.  There was a festival in Ottawa but it went under so the community there really needed and wanted a festival. The reception was very positive.  The Toronto festival is larger but Ottawa is a smaller budget and more grassroots.

We hit our 15th anniversary for our Queer Video Mentorship Project a few years ago. It started as a project for youth but times have changed. There are a lot more such projects out there for youth online and by other organizations so in 2010 we decided to incorporate seniors 55 and older. We saw a change in the need for safe spaces and access and how with the growth of technology that population is being left out.  Mixing of different generations comes with its own challenges but overall it has been a positive experience.

What direction would you like to see Inside Out go?

Not only do I want our Festival to be on everyone’s Gay Calendar (locally and internationally) but I would also want us to have the reputation and clout that filmmakers and distributors want to premiere and screen at our Fest at every chance. I know one of our programming teams’ challenges is getting certain films to commit to us based on wanting to hold out for TIFF or Cannes… I would like Inside Out to achieve similar festival status – that filmmakers see the benefits of premiering or screening at Inside Out. Many do, but I know the bigger titles sometimes hold out.

Another program that I absolutely loved and would like to see grow, is our Sound and Vision program. It was one of our most popular programs and parties to date: 2013 Sound & Vision screening and After-party with Peaches with guests Katie Stelmanis (Austra) and Joel Gibb (Hidden Cameras). Her film Peaches Does Herself screened right before the party.  It was listed as one of She Does the City top 13 parties of 2013 in Toronto. This program combines both my passions of film and music. I would love to bring in more popular bands/musicians and djs.

Tell us about one thing you look forward to the most every festival?

It’s hard to pick one but if I had it’s the festival’s launch event that happens at the end of April.  It’s a lot of work but the masses come out and the celebration starts. And its one that I know all my friends will come out to.  But I also look forward to the Filmmaker’s Brunch at Scott’s (editor note: Scott Ferguson is the Executive Director of Inside Out) house, the Galas and almost every screening that have guests where you get to engage with them.

What is your ritual the day after closing night?

I always take it off.  I chill, sleep, hangout with my partner. The last couple of years it has been the week of my birthday so I have been planning a birthday party.

On our own time you also moonlight as a DJ, what is your must play song at weddings?

The ultimate crowd pleaser is Beyoncé. It never fails.