THE RISE OF “THAT CERTAIN AGE” 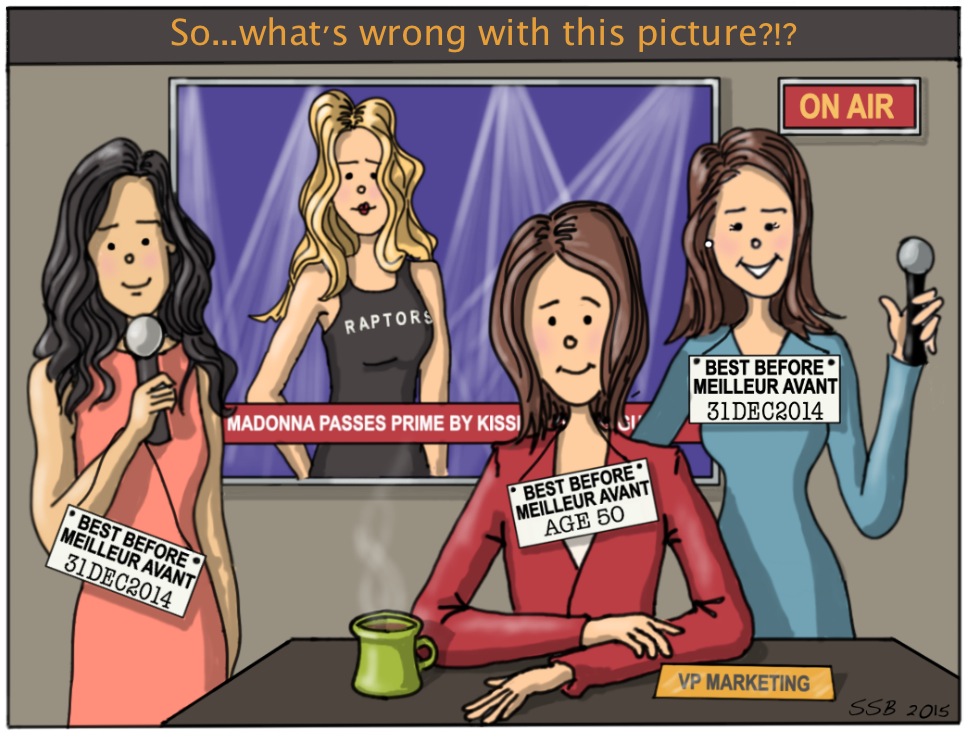 We’ve each been given an opportunity to contribute to our blog, and there’s something that’s been weighing a little heavily on me lately, so I thought I would take this opportunity to address it. I’ve debated tackling this subject because sadly, it really isn’t anything new – it’s just something that I can relate to on a much deeper level now that I’ve reached “that certain age,” which I’m guessing can be defined as anyone over 40 – I think. Whatever that term means to you, that’s how I’ll define it here. Anyone over 40.

So, this is what really triggered it for me. This past fall, in the ever-shrinking media world of ours, a wave of broadcast layoffs resulted in a few high profile and well-respected women being dismissed. These on-air television personalities all happened to be in the vicinity of that certain age (and I don’t recall hearing of any male television personalities being let go at the time). The media reported the layoffs, but no one actually challenged this, no one commented on it – at least that I could find. While the corporation may have had justifiable reason, and it may have been a coincidence, I just find it really weird and a little disheartening that the media didn’t publicly challenge it at all.

Right around that same time, I had a drink with a good friend of mine. For a while we talked about his wife’s employment situation, and I became further dismayed. She had recently lost her job in marketing, and having just turned 50, he was resigned to the so-called fact that she was “unemployable in her field”. There was absolutely no hesitation on his part when he blurted that out; he was just very matter-of-fact about it.

To top it all off, recently Madonna did the unthinkable. “THE HORROR” shouted headlines across the globe after this 56-year-old woman actually had the gall to kiss a younger artist. A quote pulled from my YouTube feed read, “Madonna seeds Drake with reptilian implant at Coachella in satanic ritual.” You can’t help but laugh at that statement, but at the same time, there is nothing funny about it. The real issue here was whether or not she had consent to do what she did – not that she was a reptilian battleax. And for the record, she is a hugely talented and smart woman who is anything but a reptilian battleax. However, most social feeds were rife with statements implying she had nerve to consider herself sexy enough, at her age, to even go there.

It’s a very interesting perspective to be watching these events unfold from the 51-year-old yard line that I now stand on. I can fully appreciate how wrong all of this is because I know and actually feel there is just no way I am close to being past my prime.

Each and every road that has lead to this point in my life and career have allowed me to see everything so much clearer than ever before. I’ve never felt more creative, nor have I ever had such an appetite to learn and grow. I’ve never had a better appreciation and understanding of the importance of positive leadership, and I’ve never had greater desire to give back. I’ve also never felt more inspired at any point in my life than I do today. The rate of speed with which the years are flying by has instilled a greater sense of urgency in me to accomplish as much as I can before I mark my final day on this planet. So, to think that some may consider me to be passed my prime astonishes me.

I know I’m not alone and thankfully there is a lot of ongoing dialogue on the perception of women in Hollywood and a lot of high-profile women are taking a stand in their own unique and sometimes hilarious ways. Examples include Meryl Streep who recently set up a fund for female screenwriters over 40; The Gina Davis Institute and The Representation Project are working hard to change the perception of women in Hollywood; Patricia Arquette delivered an impactful statement through her now famous Oscar acceptance speech, and if you haven’t seen this yet – you really must watch Inside Amy Schumer’s hilarious LAST F**KABLE DAY. It stars Julia Louis Dreyfus, Tina Fey, Patricia Arquette and of course Amy Schumer. While not really a laughing matter – dealing with the issue of ageism in a way that was sure to go viral was nothing short of brilliant.

Over the years, I’ve watched as younger inexperienced employees (both men and women) get handed big fancy titles without a clue in the world on how to properly manage or lead, effectively rendering their new titles meaningless. There are natural born leaders for sure, but I believe for most – it takes time and experience. When I was in my 20’s or early 30’s, I would not have understood or appreciated that nearly as well as I do today.

At Touchwood, our ages range from 25-51, and I am grateful and proud to be working as part of a team where there is an abundance of mutual respect. We continue to learn and grow from one and other every day, the young learning from the old and visa-versa, and it’s a place where age is a complete non-starter. In fact, we naturally use the differences in our ages to our advantage to better understand and appreciate the wide-range of projects we are fortunate to work on every day. Now that I’m in, or actually – by my own definition, I guess I’ve surpassed that certain age, I can’t help but feel certain the best is yet to come. I just wish the rest of the world would hurry up and catch on.