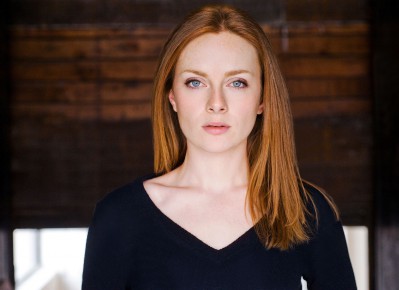 Born and raised in Toronto, actor and avid sports fan Alex Paxton-Beesley is having a great start to 2017! With acting credits in shows like Haven, The Good Witch, The Strain and Copper, Alex co-stars as Anna Funk in CBC’s new drama, Pure, about a newly-elected pastor, who is determined to rid his community of drug  traffickers. You can view the trailer for the series below:

We caught up with Alex to get her take on everything from playing Anna Funk on Pure to the Raptor’s playoff chances. Plus, she fills us in on celebratory air karate and chasing alpacas. Read on!

What drew you to playing Anna Funk on Pure? What is your favourite part about playing the character?

I loved the world she lives in. The beauty and the simplicity of the life she had chosen, and made for herself. Of course, that is very quickly complicated — and the way she handles those complications is one of my favourite parts of playing her. She’s such a strong, committed, intelligent woman, and she’s going to handle anything that’s thrown at her. I also love playing her relationship with Noah. Their marriage is so wonderfully loving, but in such a different way than we’re used to seeing. So much of their communication happens without actually speaking. It was a wonderful experience discovering and building that language with Ryan and our whole onscreen family.

Where were you when you found out you got the part in Pure? What was your reaction?

I was at home with my roommate — we were walking out the door to go meet a group of my very best friends for patio beers. I had done the chemistry test earlier that week and was trying to be zen about it and just live my life (HAH). I got a call from my agent and managers and they said, “So, why do you think we’d be conference calling you on a Friday evening…?” And so we did a lot of frantic celebratory air karate. And then I got to celebrate with some of my favourite humans! It was a very very very good day.

What has been your favourite experience on the set of Pure?

I loved learning to drive the buggy! It was super empowering (especially because I can’t exactly drive a car … I’m one of those Torontonians). Kate, our incredible 25-year-old (!) horse, is super smart. She’s a Draft Horse Plowing Competition Champion! She picked up very quickly on what “Action!” means, so she’d basically take her own cues, and hit her marks like a pro.

The farm we shot on is a working farm, so there were animals everywhere: cows, a fairly menacing bull, little field mice, chickens who would escape all the time and just come strolling through a shot, turkeys, and a rooster who couldn’t exactly tell time. He’d be crowing the sunrise until about 3pm every day. There were also a pair of alpacas — one of whom was named Tina! — and Dylan Everett and I caught them escaping under the fence one day. We chased them back into their pen and I’m not sure they ever forgave us. Halfway through the shoot, the owners of the farm brought home a Dalmatian puppy … so, yes, it was the dreamiest place ever to shoot. Total magic.

Your next project is a play called Slip. Which do you prefer, stage or screen?

I can’t say that I prefer one over the other. I love the rehearsal process and the collective discovery that theatre involves, as well as getting the feedback of performing in front of a live audience. But I also love the immediacy of film work, and how minute and specific the medium can be. I just love acting! I’ll do it in any form I can.

We know you’re a huge sports fan. What do you think of the Raptor’s chances this year?

Listen. I have absolute faith in our beautiful sports angels. But the East is GOOD this year. I like our depth, but I wouldn’t be upset if we could add another big man (miss you, Biz). I have a ton of respect for Masai and I’m interested to see if he can rustle anything up before the trade deadline.

Regardless of any potential moves, I think as long as our guys stay healthy and take care of each other and keep communicating on the court, we’re going to do well — we’ve got a ton of character, and you can see our more veteran players mentoring the heck out of the young guys on the court. I’m so proud of them. Seeing those ads last year — LeBron and Steph and Kevin and WAIT THAT’S OUR GUY KYLE?!! Oh man. Heart bursting. So proud. I’d love to see us in the final four again. Right now, though, I’m focussed on getting Kyle and DeMar to the All-Star Game. They’ve both done such massive things for our franchise and they really deserve it — and they both just keep getting better, it’s ridiculous! I love them! I love them a lot.

Catch Alex Paxton-Beesley in Pure on Mondays at 9PM ET on CBC.