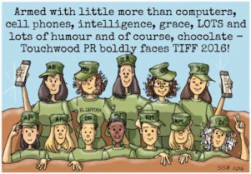 With over 94 years of combined experience working TIFF, we’re ready for the festival by now. But that being said, anything can happen at TIFF! Our busiest time of the year is filled with hilarious moments, unexpected changes in our best-laid plans and experiences to learn form. So for those of you working your first TIFF, or just those curious about what the festival is like for a publicist, read on for top moments, survival tips and more from the Touchwood PR team!

Top TIFF Moment: There are a few:

– Running the red carpet for The Assassination of Jesse James when Brad and Angelina had their first public appearance together and Yonge Street had to be shut down. I’ve never in my life felt the roar of thousands of people so closely. At that moment I realized how weird my job was and how idolatry is a real thing. 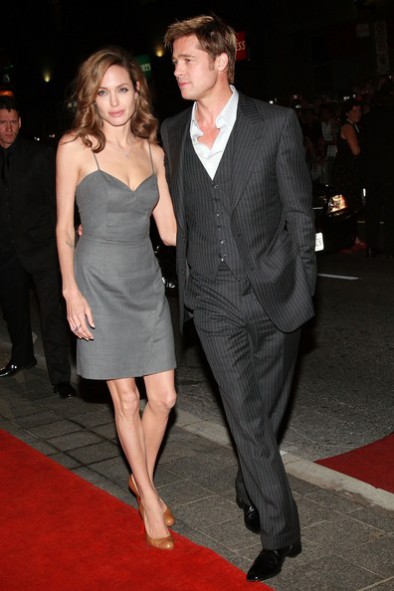 – Working for three weeks straight to organize the most intense press conference for Precious. The content was so emotional that I was bawling after backstage and was tenderly consoled by Mary J. Blige.

– Losing my cool completely when I met Pedro Almodovar at a cocktail and I tried to explain how we share similar backgrounds and I was so awestruck that I basically forgot how to speak Spanish.

TIFF Survival Tip: I have many tips so indulge me.

– Keep your feet on the ground and your egos in check and all will be well.

– Only wear heels if you were born to, otherwise you become useless to yourself and your team.

– News cycles are 24 hours or less so if something shitty runs in the press, don’t harp, move on.

– Celebrities are not your friends. Be professional – don’t ask for selfies.

– Friendly flirt with security guards and chauffers – they are the people who work the craziest hours and need your kindness the most. Also – nothing happens without them.

– People never remember what you said or did, but they alwasy remember how you made them feel.

Top TIFF Moment: Having a full telephone conversation with Sir Anthony Hopkins all the while thinking I was speaking with my friend and previous boss Tony. (Sir Hopkins called me on my cell and said, “Hi Susan, it’s Tony.) 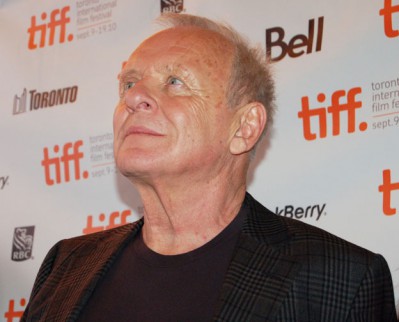 TIFF Survival Tip: Get as much sleep as you possibly can, whenever you can and however you can.

Top TIFF Moment: Too many to pick but a definite highlight was the two days with the legendary director Francis Ford Coppola – our conversations, the special little wave from the press conference stage and the grandfatherly kiss on the cheek when we said goodbye. 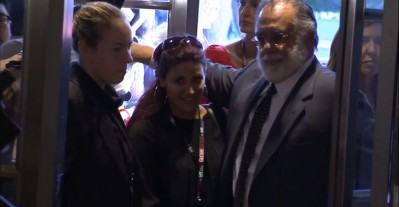 TIFF Survival Tip: Plan as much as you can but know that nothing will go as planned and things will change. Going into TIFF with this in mind will help you keep your sanity.

Top TIFF Moment: Working with the Kenyan filmmakers of STORIES OF OUR LIVES in 2014 after they made the brave choice to come out to the world before their World Premiere. They originially intended to stay anonymous to protect their identities. Kenya has anti-gay laws that, if broken, can lead to a 14 year prison sentence. 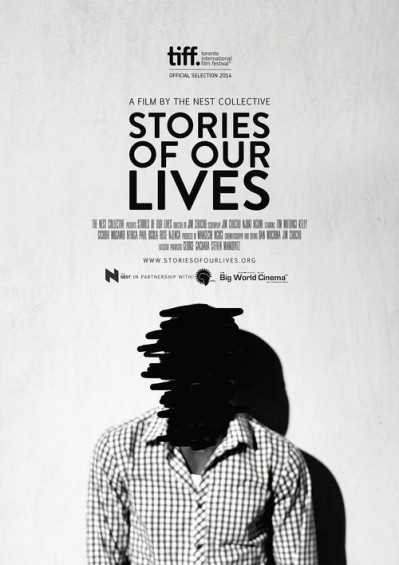 TIFF Survival Tip: SLEEP! Sleep is sparse so get it whenever you can. Mistakes are made and little problems might seem much bigger than they actually are when you are sleep deprived.

Top TIFF Moment: I was doing a press day for Rebecca Millers’ The Private Lives of Pippa Lee. My son Jensen was only 7 months old and still relied on me for food – and my mom was watching him so I could work TIFF. She was instructed to bring him to the hotel during the break for lunch and they were waiting for me as I was scavenging for chocolates for the cast at another suite. When I got back to the suite, my son was missing and I asked my mom where he went. She said, “I don’t know, a pretty publicist took him to Keanu Reeves because she said Jensen looked just like him.” When I asked my coworkers who had the baby, no one knew. I found Jensen in the back room with the cast who were having lunch. That pretty publicist…was Robin Wright. 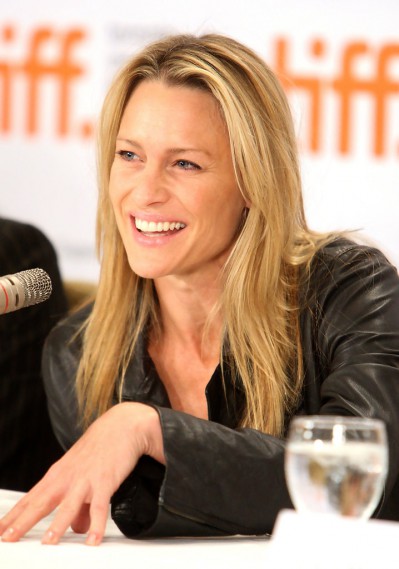 TIFF Survival Tip: Pace yourself. It’s a long haul, so make sure you don’t burn out in the opening weekend. And expect that nothing will go as planned. That schedule may look good going in, but be ready to react with Plan B, C & D when talent or journalists are running behind or don’t show up! 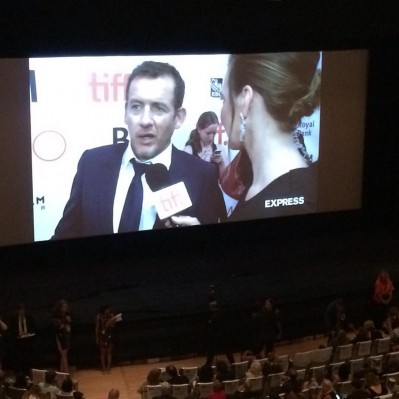 Top TIFF Moment: Last year I had the chance to work on Catherine Corsini’s film Summertime. Catherine and her producer/life-partner Elisabeth Perez both came to present the film in Toronto, and they were really great and we had a lot of fun! During the second screening, she called out my name during the intro which was quite funny, and some of my friends in the audience think I definitely have a cool job now!

Top TIFF Moment: Working on Jeremy Saulnier’s 2015 American horror-thriller, Green Room. I had never worked that closely on a film during a festival, and despite the stresses taht came with it, the experience was full of many memorable moments like spending time with Jeremy Saulnier, Anton Yelchin and Sir Patrick Stewart. 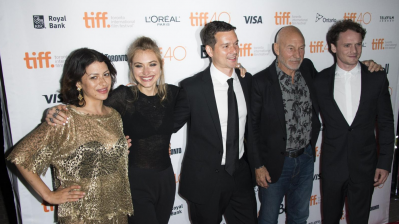 TIFF Survival Tip: Remembering the essentials – food, sleep, and taking a deep breath every now and then. The whole festival can be so hectic and quick-paced that it’s not unusual to forget to eat, to spend long hours at the office late in the day or early in the morning. That said, in order to have the most positive festival experience you can, you need to look after yourself first!

Top TIFF Moment: I loved working on She Stoops To Conquer last year. It was director Zack Russell’s first film at the festival, and also the first film that I handled totally on my own. He and the cast, Kayla Lorette and Julian Richings, were incredibly nice and great to work with, which made handling my first solo film a breeze! It was especially fun taking them to the CFC BBQ! 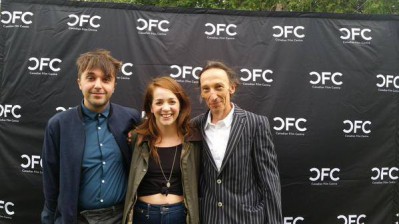 TIFF Survival Tip: Celebrate the victories! Put your schedule together on time? Get a high five. Land a big interview? Do a happy dance. TIFF can be exhausting, so it’s important to feel proud of all the hard work you’re putting in.

Number of TIFFs worked: This will be my first one! 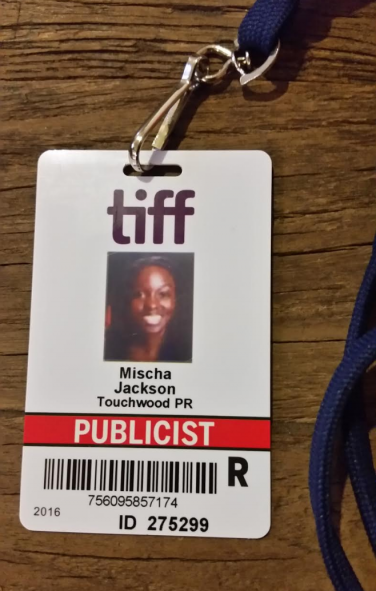 What are you most looking forward to at TIFF?

I’m actually really looking forward to learning from the pros at Touchwood PR!

I’ve been told that I need to make self-care a priority during the festival. With the long hours, there’s a good change that sleeping and eating will be last on my list, so I’ll need to carve out some time to make sure that I eat and am somewhat well rested!

Now get out there in the trenches, and kick some butt! Happy TIFF! 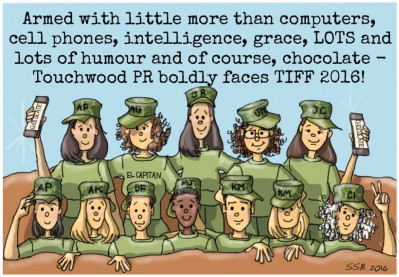