This past Saturday, during the opening weekend of the 43rd annual Toronto International Film Festival, the temperature dropped nearly 20 degrees from the previous day. That didn’t stop crowds from gathering for the Share Her Journey Rally, a part of an ongoing initiative at TIFF. The Share Her Journey initiative, created by Maxine Bailey, Vice-President of Advancement for TIFF, and the rally are a celebration and a demand for female representation both in front of and behind the camera.

Thousands gathered to hear from some of the biggest champions of the movement, actors, directors, leaders in the industry. Including the over 22,000 that tuned in online!

Andréa Grau, Founder & Owner of Touchwood PR and VP of Public Relations and Corporate Affairs at the TIFF, is one of the leaders behind the Share Her Journey Rally. We spoke with her just moments after the Rally to learn more.

TWPR: We just got back from the big Share Her Journey Rally! How do you feel?

AG: Amazing! Relieved. Happy. A little bit overwhelmed. It was everything we wanted it to be and it rolled out perfectly. 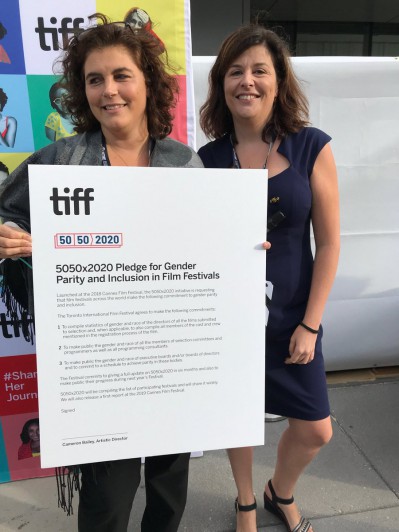 TWPR: For those who don’t know, what is Share Her Journey, and why did we rally today?

AG: Share Her Journey is an initiative that was launched by TIFF last summer and it’s their gender parity initiative. It’s a fundraising campaign to raise funds for mentorship programs, to really build the pipeline in the filmmaking community so that there are more women behind the camera, in front of the camera, and below the line, to make sure that 5050×2020 becomes a real thing.

AG: Cannes was the first to sign it. It’s about inclusion. It’s about inclusion, not just with filmmakers but also within the industry itself as a whole so that there’s proper representation from a diversity perspective as well as from a female perspective. So “50/50 by 2020” is the goal. TIFF is doing quite well. We’re well on our way. This year 36% of our films were by women, which is an increase of a couple of percent over last year. There’s a lot of work to do. We’re building the pipeline now as much as possible so that by 2020, in two years, we’ll have more selection of female-directed films to choose from. 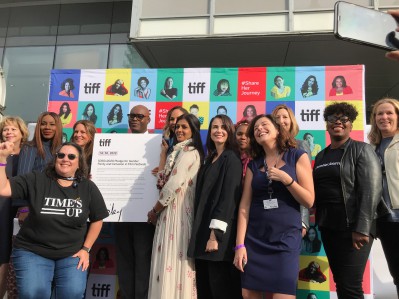 TIFF Co-Head and Artistic Director Cameron Bailey holds the signed 5050×2020 pledge alongside the pledge organizers and speakers at the Share Her Journey Rally.

TWPR: For those that missed the rally, what are the big takeaways that we should be left with?

AG: Well, it was streamed online so watch it! Check out TIFF’s social feeds. You’ll be able to find the full rally there! For me, the big takeaway was “community”. We have to work together and not just by building the sisterhood, but by really building men and women of all backgrounds to come together as a unit to work towards parity. That is not just the females’ job to do. It really is a job that belongs to all of us. I’m raising a daughter and two boys, and it’s my job to teach and encourage them to go out into the world, be kind, have empathy, and to speak up when they see that things aren’t right. They know the difference. I find that the younger generation is much more awake than we are, than my generation was. It’s something that gives me a lot of hope when I see them walk through the world.

TWPR: At the rally today, we heard from some of the biggest champions of the cause. Who would you say were your personal champions for getting you to where you are and inspiring you to build this movement?

AG: I would say that there have been a couple of mentors along the way. It’s not one sole person. So for me, I can’t say one. I mean, other than Gloria Steinem. She’s the queen. For me, it was the friendships I’ve shared along the way that have really inspired me.

TWPR: How can people continue to support Share Her Journey?

AG: You can always donate! $25 goes a long way! But also, watch films made by women, and not just about female stories, but from a female gaze and the lens of a woman. [See films] from how she sees the world, not just female stories but universal stories. 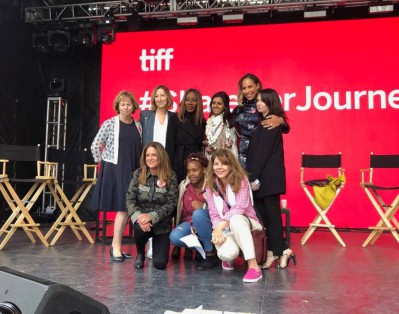 Speakers at the Share Her Journey Rally gather for a group photo.

Between the Share Her Journey initiative, The Rally, and the pledge towards gender parity, TIFF has never been more supportive of female filmmakers. The festival continues through to September 16.